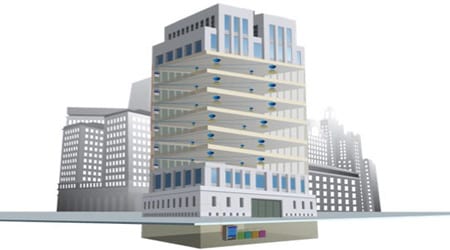 (Originally published by FacilitiesNet.com in May 2016; shared with permission)

More than 80 percent of all phone calls originate or are received on a cell phone, so to avoid frustrating signal loss, it’s critical that a strong signal be available all the time at any location.

Building design can be a factor in interrupting that signal which can lead to dropped calls or fading signals. Materials that help make buildings stronger and more energy efficient are often resistant to radio and cellular signals. While a small cell solution may be ideal for small buildings, larger buildings require a more robust solution.

Fortunately for large building occupants and administrators, there’s a proven technology solution to overcome the “dead spot” problem: deployment of a Distributed Antenna System, typically referred to as a DAS.

DAS isn’t a brand new idea; the concept was initially described in a technical paper back in 1987.

Essentially, instead of relying on a single, powerful antenna to provide a signal, DAS utilizes multiple, low-power antennas to cover the same area…but without the penetration and fade depth issues that are common with a single antenna system. This approach provides a more consistent signal coverage and much greater capacity.

As a result of the world becoming more and more dependent on mobile devices, having them work in all venues has gone from a nicety to a mandatory requirement. Buildings without wireless support are losing tenants and have a difficult time recruiting new ones. Many states, cities and municipalities since 9/11 have enacted code making it mandatory to have a Public Safety system in place. These efforts have made wireless the latest required utility, one that is often referred to as a Wireless Utility Network (WUN).

A recent study from analyst firm IHS estimated 2014 DAS revenue reached $2.2 billion, an 11 percent increase over the previous year, with the majority of the deployments in China and North America.

The Internet of Things (IoT) and Bring Your Own Device (BYOD) trends contribute to fueling the growth of DAS deployments. With Cisco estimating a global IoT market of more than $14 trillion by 2022, it’s apparent there will be many “things” communicating with each other and sharing data at an exponential rate.

AT&T Chief Strategy Officer John Donovan refers to the upcoming surge in demand a “wireless data tsunami.” Data traffic has doubled on AT&T’s network every year since 2007. Meanwhile, Cisco estimates that this year there will be more mobile devices than people on Earth.

All of these trends are converging to create additional demands on our wireless systems that show no sign of diminishing.

For architects and designers, considering the necessity of appropriate communications technology is a given. One of the advantages of the DAS technology offered today is that it can be designed to utilize a horizontal fiber or Category 6a infrastructure supporting other applications such as Wi-Fi, surveillance, building automation, voice, video, LAN and Public Safety. This helps drive the cost of all these down while increasing capabilities.

The biggest opportunity for DAS deployment lies in what is referred to as the “middleprise”: venues of between 100,000 to 500,000 square feet. With a global market for middleprise build-outs estimated at $20 billion, there’s a great deal of opportunity. While indoor cover optimization is most often cited as the primary driver for DAS deployments, the highest barrier is the cost of deployment.

Regardless of whether your venue uses DAS, small cell, Wi-Fi or a combination of multiple types of access nodes – referred to as a “HetNet,” or heterogeneous network – it’s apparent that the demand for voice and data services is growing at a frantic pace and requires a well-planned strategy to deliver on the expectations of consumers.

RF Connect is a national leader in the design and deployment of high performance wireless networks. The company has designed and deployed thousands of indoor and outdoor systems in high-profile venues such as hospitals, airports, college campuses, stadiums, arenas and tunnels. Whether single or multi-carrier cellular, Wi-Fi, LTE, public safety, or virtually any other wireless technology, RF Connect provides intelligent, efficient solutions to meet the needs of the most complex venues. Please visit www.rfconnect.com for additional information.